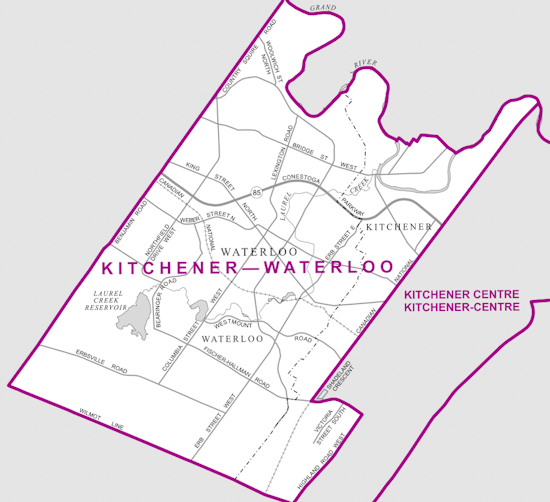 Kitchener-Waterloo is a provincial electoral district in the province of Ontario, that has been represented in the Legislative Assembly of Ontario since 1999, after changes to the previous riding of Waterloo North and surrounding areas.

Since 1999, the electoral district of Kitchener-Waterloo is defined to consist of the City of Waterloo and the part of the City of Kitchener that lies north of a line commencing at Wilmot Line and Highland Road West, then following to the intersection of Highland Road West and Fischer Hallman Road, turning northwest up Fischer Hallman Road and then tracing northeast along the CN railway located north of Shadeland Crescent following through to the easterly limit of Kitchener. The City of Waterloo covers an area from Wilmot Line northwest to Benjamin Road/Country Squire Road, then using the Grand River as its northeasterly border.

The socio-economic composition of Kitchener-Waterloo is diverse, having both low-income residents and high-paying positions in a variety of major high-tech and financial companies. The riding is unique due to both these aspects and the significant presence of post-secondary educational institutions such as the University of Waterloo, Wilfrid Laurier University, and a campus of Conestoga College. Due in part to this, census data shows Kitchener-Waterloo residents as being twice as educated as others in the region, with family incomes 17 per cent above the provincial average and a comparatively young population. Kitchener-Waterloo is also home to the largest Chinese and South Asian populations in the region, and has fewer residents below the poverty line than the provincial average.

Stay in the loop Issues About